When I think of Sydney, fresh oysters come to mind. Heaps of fresh oysters in the half-shell, chilled, slightly briny, slightly sweet, swimming in their juice. Since they were so fresh in the market, there was no need for any elaborate sauces. Just a simple squeeze of lemon and they were ready to eat!

The first counter that greeted me as I entered the Fish Market was Christie’s. As you can see, they freshly shuck the oysters right in front of you, and lay out the different kinds in a showcase window.

There were several kinds to choose from, and when I asked for help, the servers would ask me whether I liked them sweet or salty.

If I wanted sweet, this is what they would recommend:

If I wanted salty, they’d recommend these 2. These ones were farmed…. 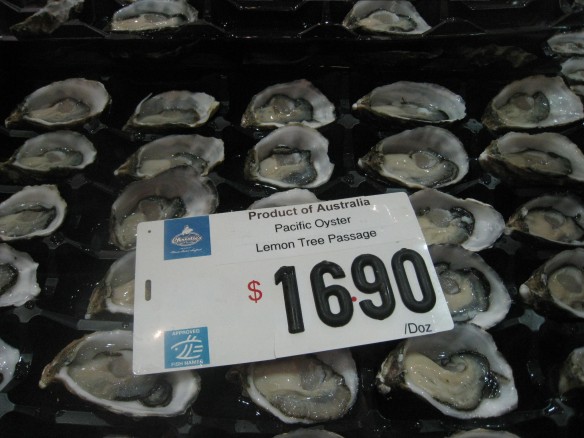 …..while these ones were wild.

I asked what the difference was, and the server just said, “Actually to me, they all taste the same.” How disappointing! But I suppose if you’re surrounded by oysters everyday, you do get a little blase!

So, like a true, indecisive gourmand, I ordered all (total: 2 dozen!). Don’t get shocked. They’re non-fat anyway :).

For me, I liked the wild ones best. I couldn’t really tell if the sweet ones were really sweet, or the briny ones really salty, but the wild ones had the best texture, and were the meatiest.

Aside from oysters, there was also lobster! I did eat one (or one-half of one) but would have preferred a simple steamed one, rather than one covered in cheese. That seemed almost criminal to me. 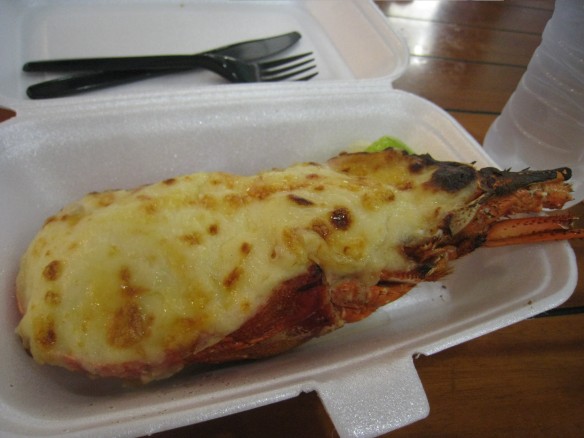 For those who aren’t oyster fans, never fear. There is also, believe it or not, fresh fish (see the sashimi counter in Christie’s) which you can ask to grill. Prawns and shrimps abound as well. 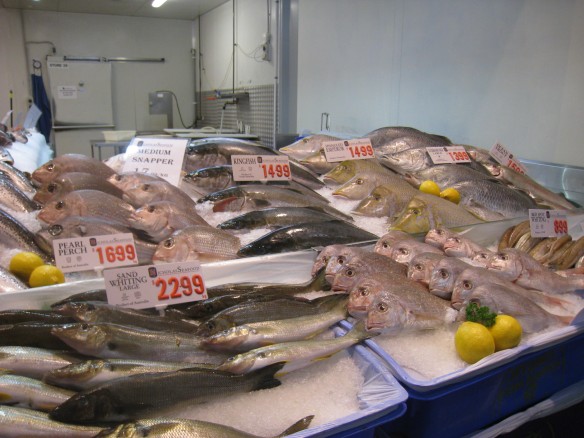 And fresh fruits! I just had to take a picture of the “topless pineapples”.

The Sydney Fish Market was such a clean place as well. No “fishy” smell! They open 7am until 4pm, so if you can start the day right with the freshest catch of the day!