Having been to Beijing before, I was most interested to see the new structures that China built for the 2008 Summer Olympic Games. I’m sure most of us watched the Opening Ceremonies (and what an amazing production that was!), and because of that, I was very eager to see the Bird’s Nest (or, its more formal name, the Beijing National Stadium).

It was nicknamed the Bird’s Nest because of the random pattern the steel beams formed in its exterior.

According to Wikipedia, these beams were used in the design to primarily hide the retractable roof, which was a requirement to host the Games. If you want to read more about the Bird’s Nest, click here.

What I noticed about the Bird’s Nest was that a lot of the elements of the building were in theme. For example, the small lights that lit the path going to the Bird’s Nest proper. 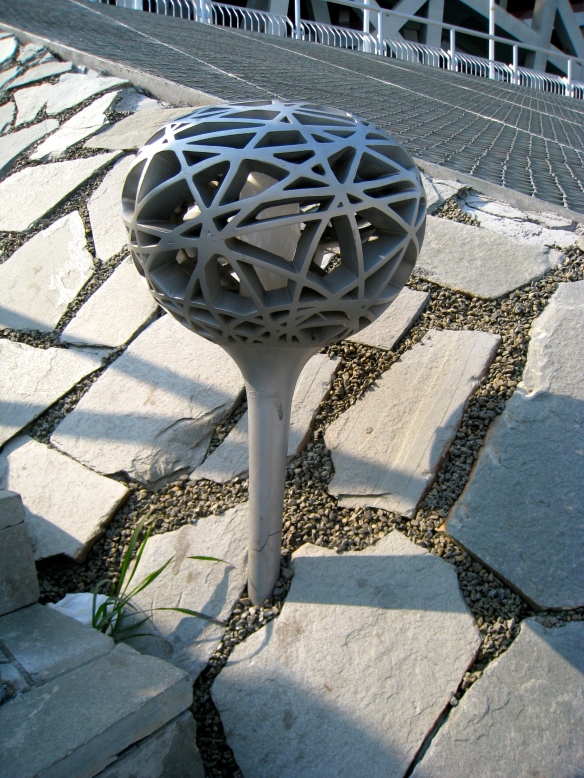 Inside, we saw a lot of tourists, mostly, from the looks of it, from provincial China. I didn’t see too many foreigners there. Visitors are allowed to enter the stadium seats, and go up to the track oval.

However, no one was allowed to go ON the track oval. I can just imagine how many visitors will be trampling on the oval for photo ops! To enforce this, security guards were posted at various intervals. Mercifully, they were given an umbrella for a bit of shade, since the sun could be quite brutal.

Here’s my attempt at a panoramic shot.

Currently, the stadium continues to host several sporting events, and even an opera (again, according to Wikipedia).