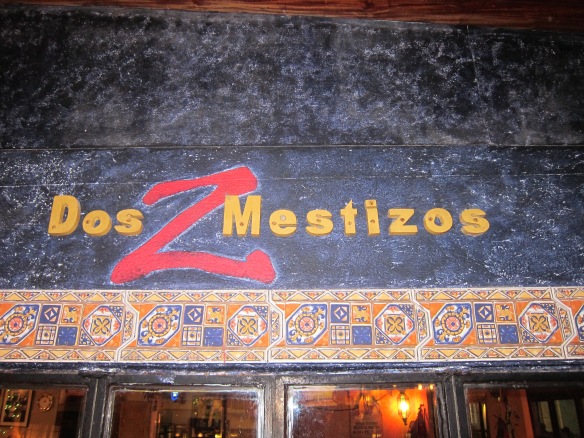 DH and I decided to go to a well-reputed Spanish restaurant for dinner in Boracay. Friends in Manila have told me about Dos Mestizos, and I am fortunate enough to befriend the chef-owner, Binggoy Remedios , but I have never eaten there. Aside from the glowing reviews from fellow foodies, it got a good rating from tripadvisor (#6 out of 147 restuaurants!).

Frankly, I don’t really expect much when I dine in Boracay. I come here not for the food, but for the beach experience: the fine sand, the lounging in the sun, the lazy life. Also, I do understand that fancy ingredients are hard to come by in the island. It distresses me when I eat food that tries hard to be “haute cuisine”, but falls so short because they’re trying so hard to be something they’re not. I like sticking to the best ingredients of the island: simple, fresh seafood, without any complicated sauces or preparations masking their natural sweetness.

Dos Mestizos looks like a rustic Spanish restaurant, with earthy colors and dim lights. A large window to their kitchen dominates the dining room, emphasizing the chef’s pride in his kitchen’s cleanliness and orderliness.

Dozens of magazine articles decorate the wall: a testament to Chef Binggoy’s talents and marketability.

This mural of a nude maja shows Binggoy’s artistic leanings. 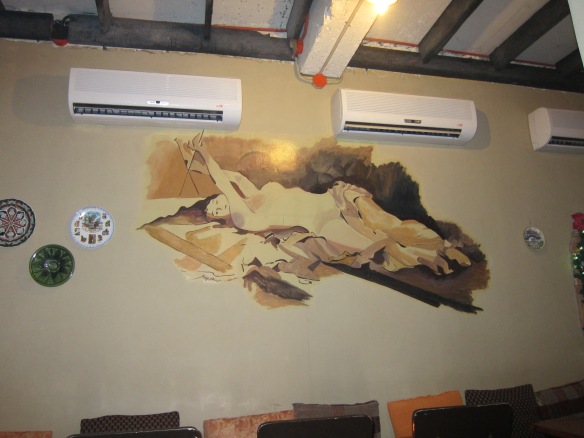 Their bar is in the middle of the dining room, inviting solo diners to sit and just people watch from the best vantage point of the restaurant. We’re lucky enough to see Binggoy by the bar, and say hello. 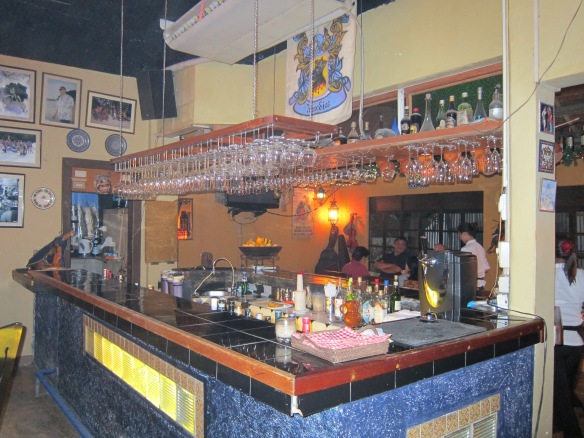 After we order, Binggoy takes us around, showing us his wine room, his deli, and his bake shop. He proudly says that they make their own bread. I see ciabatta, baguettes, and gorgeous whole wheat sandwich bread. 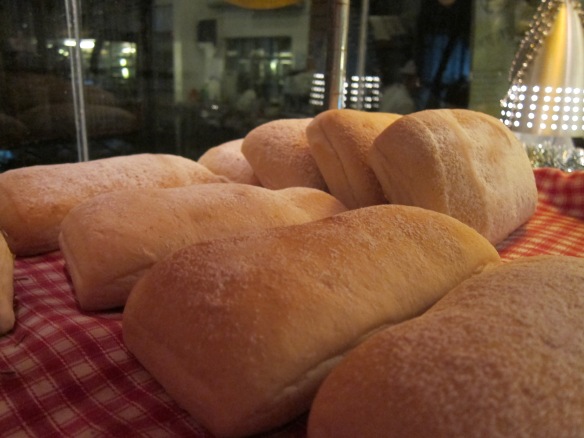 Two tempting legs of jamon serrano hang temptingly at the deli window, and his deli showcase displays an assortment of cheese. The deli is bright and inviting, and Binggoy says that his sandwiches are quite popular. I surmise the fresh bread has something to do with it. 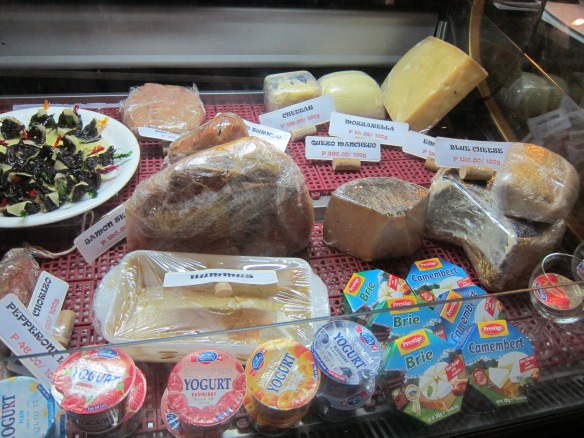 But we’re here for dinner, and so Binggoy settles us in a table and gives us a complimentary carafe of sangria. Since we’re only 2, we can’t order our usual array of tapas, so we settle for two: their homemade chorizo and slices of manchego. The chorizo was excellent! Packed with flavor of the pork and paprika, they sizzle deliciously in the  traditional earthenware dishes. They’re served with pan-fried,  diced potatoes and whole garlic cloves, both cooked perfectly. The garlic was sweet and mild, and the potatoes were crisp on the outside, adding to the textures. But the best part of the chorizos? The bits of fat in the sausage! They’re large enough that you can taste the fat.

Here’s a shot of the tapas menu, just so that you have some idea of their offerings and prices. Exchange rate was 1USD = 41PHP.

For our main course, we order their assorted seafood platter: a combination of fish and shellfish, with a light beurre-blanc sauce. We had Aklan clams (large, sweet clams), mussels (tiny ones, so they weren’t rubbery), native scallps, grilled shrimps, and salmon. Of all the seafood, only the salmon wasn’t freshly caught (salmon isn’t a local fish of the Philippines, and are brought in frozen). While the salmon was still excellently cooked (crisp skin, and medium-rare), I felt that it didn’t belong in this platter of mostly local seafood. But, all the seafood was delicious: lightly seasoned, letting the natural flavors shine.

Sorry, but we were so excited by the food that I forgot to take pictures!

For postre, or dessert, we had the warm bread pudding with natilla, or condensed milk, and liquored ice cream. 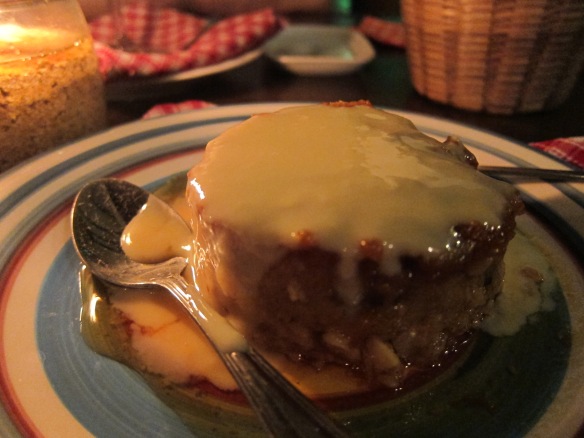